We all know passwords suck

If you don’t, google “why passwords suck” and I’ll spare you a few pages.

Over the years, websites have required users to create increasingly complex passwords in an attempt to thwart attackers from brute forcing their way into victim accounts.  Every website has its own ridiculous set of rules, resulting in passwords that are difficult to remember.

Many opt to create one “good” password and use it for all of their online accounts.  What “good” looks like depends on your stance regarding entropy vs. complexity, but in any case the result is the same — people are using one password for all of their accounts.

Password theft aside, this might be okay if every web application could be trusted to transmit and store your password securely, but the fact of the matter is that they often can’t.  And even if they’re keeping up with the secure storage standards of the moment, there’s never any telling how long before researchers find a fatal flaw within the hash functions themselves, or when hardware improvements will render feasible brute force times against a given algorithm.

In short, if an attacker can steal your password from one website, that same password will likely work elsewhere.  Worse yet, most websites accept an email address as a valid login name, thus simplifying the attack even further — one email, one password, all of your accounts.

The act of stealing credentials from one website and attempting to reuse them on other websites would eventually come to be known as credential stuffing.  Attacks like these are hindered by protections such as two-factor or multi-factor authentication (2FA / MFA), geolocation tracking, etc., but even those have their shortcomings (assuming they’re enabled to begin with).

According to a report published by Akamai, they observed nearly 30 billion credential stuffing attempts in 2018 alone.  It’s difficult to nail down credible sources of success rates, but if even 1% of those attacks are successful, we’re looking at a potential 300 million compromised accounts.  Combine that with the fact that Akamai states they only observe between 15-30% of all web traffic and we’ve got a serious problem.

How the bad guys do it

The process for executing these attacks is simple:

These attacks are generally not personal; the attacker just wants valid accounts and they don’t care to whom they belong.  Stolen accounts will often be sold on a darknet market to be used for nefarious purposes.

While Datto has offered 2FA as an opt-in feature for several years, the growing popularity of credential stuffing attacks made it clear that we have a responsibility to enforce secure policies on behalf of our customers and end users.  Earlier this year we announced that we’d be transitioning into a mandatory 2FA policy for all Partner Portal accounts (our customer platform).  This would ensure that even if a customer’s password was out in the wild, the attacker would still need to get past the second factor authentication before they could cause any harm.

Of course, defense in depth is the name of the game here.  What if we could prevent credential stuffing attacks from being successful in the first place?

We brainstormed a few ideas:

Option #1: We could use the Have I Been Pwned (HIBP) API to search for our customer emails and/or passwords.

This was quickly ruled out for several reasons:

Option #2: We could fire up an Amazon EC2 instance in an effort to brute force each customer’s password with a list of common and weak passwords.

This is somewhat ineffective against bcrypt, but more importantly it’s inconsequential towards our specific effort to prevent credential stuffing.  Just because someone utilizes a weak password doesn’t necessarily mean they’ve been involved in a data breach.

Option #3: We could just do what the bad guys do by obtaining some data breach credentials and trying them against our own login page.

This would be very slow and would generate a lot of unnecessary traffic.

After evaluating all of the tools at our disposal, we realized that we can leverage both the data breach credentials and the customer's bcrypt password hash to assist us:

The first action was to obtain copies of the data breaches known as Collections #1-5, amongst a few others.  For obvious reasons, I’m not going to detail how to obtain these (and please don’t ask).  The combined lists are said to total to nearly 28 billion stolen credentials (most of which were duplicates as I later discovered).

The lists were packed deep within a recursive maze of compression by various means (tar.gz, zip, rar, etc.).  I didn’t keep any notes during this phase, but here’s what I remember:

Since I only had a few days to finish this project, I didn’t have time to analyze and digest every individual list.  I opted to take an 80/20 approach.

I figured since the majority of files were txt and csv, they would likely contain credentials in the pattern of: <email><delimiter><password or hash>

This would likely be incorrect for things like SQL dumps, but I randomly sampled enough files which adhered to this form that I felt comfortable moving forward with the assumption.

Using grep and some loose regex, I recursively extracted anything matching the above pattern:

-r: Recursively read all files under each directory

-h: Suppress the filenames on output

-o: Only output matching segments, not the entire line

The regex pattern itself is a simplistic way to match on any string which follows the form:

Doing it this way also yielded irregular and non-printable characters which I’d have to parse out later.

Next I used sed to accomplish a few transformations:

At this point the list now contained rows in the form of:

Two problems remained, both of which were solved with awk:

After this, any rows which did not follow the format of <email><comma><password> became mangled and useless to me, but at least they wouldn’t cause any issues during the SQLite import.  I also assumed that the emails and passwords themselves didn’t contain commas, but I’ve found it very rare for websites to allow such a thing.

Next, I sorted and uniquified the output list.  I used the -T flag to set a custom working directory, which I recommend anytime you think you’ll run out of disk space (the default is /tmp on the OS drive).  This operation can take days or weeks to complete, so it’s best to run it in screen/tmux, or otherwise parallelize it:

I wanted to create a simple schema that would accomplish three things:

In the end, I landed on the following:

Although credentials.csv was only 103GB, the SQLite database itself was 396GB.  This was largely the result of indexing the email column.

All that’s left to do is query the credentials database for each customer email and check if any of the resultant passwords match the customer’s when hashed.  The bcrypt library in Python makes this trivial by providing a checkpw function, allowing you to test a plaintext password against a given bcrypt hash.

The entire cracking process was accomplished with a simple Python script:

We can obtain worst case statistics by leveraging @example.com email addresses.  These addresses have dozens of corresponding plaintext passwords which should significantly hinder our cracking speed.

Cracking these example bcrypt hashes on an Intel i5-4460 took about two seconds per hash, giving us a theoretical lower limit of around 43,000 hashes per day.  In reality, most email addresses only have a few plaintext passwords associated with them (if any), meaning the process will be much faster against real data.

Running this script against tens of thousands of our customers only took about an hour.  Our total success rate was about 0.56% — several hundred customers in our case.  We alerted the vulnerable customers about our research efforts and forced a password reset after a grace period.

Although this was initially intended to be a quick and scrappy one-time ordeal, I later realized the long term potential of building a professional internal service out of this concept.  A fully-featured application might include:

As of today, it’s arguable that the best prevention for credential stuffing is to utilize:

While this is a highly effective strategy, it does bring about the risk of having all your eggs in one basket.  Taking the time to audit each password manager’s history of secure practices would be a worthwhile endeavor before making any commitments.

In addition I would recommend keeping tabs on your email addresses by subscribing to Have I Been Pwned’s “Notify me” feature (link at the top of the front page). They’ll email you whenever your address is involved with a data dump, and they’ll even include details about the kind of information that was exposed.  It’s worth noting that many password managers include this feature and can query the HIBP API automatically on your behalf. 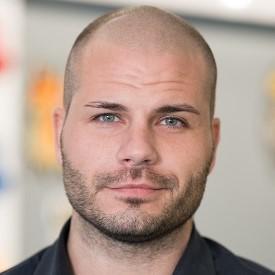 I hack our things so the bad guys don't have to.